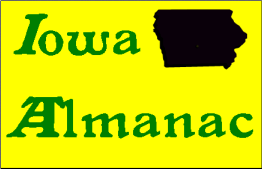 From his youngest days, Arthur J. Hartman of Burlington was restless. He once told his wife he couldn't stand just looking at four walls.

That led him to the sky.

On September 6th of 1903, when he was only 15, Art Hartman made his first solo flight in a balloon. That was before the Wright Brothers took to the sky. He soon got a job parachuting from balloons.

But he was convinced that the future of powered flight lay in heavier-than-air craft, and before he was 22 years of age, Art had built his own monoplane.

Early on the morning of May 10, 1910, on a stretch of the Burlington Country Club, Art Hartman tested his plane in front of five spectators. It flew...granted, only 10 feet in the air, the height of a basketball hoop, and not very far...but it flew. That made it the first flight of heavier-than-air craft in Iowa.

After World War I, Hartman rebuilt and sold crashed planes, and started his own airplane manufacturing company in 1928. And he never stopped testing aircraft. In 1956, at the age of 67, he hooked 50 hydrogen balloons to a bicycle and soared 150 feet in the air--15 times higher than his first flight almost a half century before.

Hartman kept flying in one way or another, until his death in 1971 at the age of 82.

​​​​​​​And that's I﻿owa Almanac for May 10th...Listen to the extended audio version of today's story by clicking on the audio player above. ﻿

The most talented basketball players dream of hearing their names called by the National Basketball Association commissioner as part of the professional league's annual player draft.

But on May 7th, 1969, a different sounding name was called. It wasn't the first player selected; he was then known as Lew Alcindor from UCLA, selected as the top pick by the Milwaukee Bucks. He went on to win rookie of the year honors.

This was a player selected in the 13th round, right out of Union-Whitten High School in Iowa. The owner of the San Francisco Warriors, Franklin Mieuli, told his staff to select a 5' 11" player who averaged 68.2 points per game as a high school senior, including 111 points in a single game.

That player was Denise Long, who ended her high school career with 6,250 points, and became the first female ever drafted by an NBA team.

Franklin Mieuli thought it was time for a women's professional league, and his drafting of Denise Long was a statement toward that goal. He even had women playing games before the Warriors contests, but it was an idea ahead of its time. The WNBA finally started play in 1997, nearly 30 years later.

As for Long, her notoriety led to an appearance on the Tonight Show Starring Johnny Carson...pretty heady stuff for a girl from Whitten, Iowa.

Ten years after she was selected in the NBA draft, Denise Long was part of an Iowa professional team, the Iowa Cornets. She played in one game, scoring one point...but the fans in Cedar Rapids honored her amazing high school career by giving her a standing ovation when she came into the game.

Back when Denise Long led her Union-Whitten team to a state 6-on-6 championship in 1968, there weren't many options for young women who wanted to play basketball. It was before Title IX equal rights laws...women did not play basketball in the Olympics...and there was no way to make playing basketball a career.

But there was that amazing high school career...and the designation of being the first female ever drafted by an NBA team, on this date in 1969.

​​​​​​​And that's I﻿owa Almanac for May 7th...Listen to the extended audio version of today's story by clicking on the audio player above. ﻿

Imagine receiving this letter..."Dear Sir. By tomorrow evening's mail, you will receive two volumes of the 'Irrepressible Conflict' bound in black. After perusal, please forward, and oblige."

That letter, which was sent by G.W. Weston from Low Moor to C.B. Campbell in Clinton on May 6th, 1859, had nothing to do with books or literature. Instead, it was code, used to tell Campbell to expect the arrival of fugitive slaves travelling through what was known as the Underground Railroad.

Typically, the actual railroad was not used by those who were making their way across Iowa to freedom. The roadbed was the normal traffic path, and buggies, oxcarts, wagons, and other vehicles of the era were used to move the passengers from station to station. The phrase "underground" refers to the secrecy of the whole operation.

The main line of the Underground Railroad in Iowa entered near Tabor in southwest Iowa, and ran through Lewis, Des Moines, Grinnell, Iowa City, West Liberty, Tipton, DeWitt, and Low Moor, crossing the Mississippi River at Clinton into Illinois.

The whole endeavor relied on the support of sympathetic citizens along the way, since the slaves were escapees, and anyone helping a slave to escape was violating the law.

And word quickly spread, making the route through Iowa very popular among those who literally took their lives in their hands, escaping from their masters and making their way to a place called Iowa, where they might get help.

That was clever code, referring to a book called "irrepressible conflict" and saying the book was bound in black...that language, used in a letter sent by Mr. Weston alerting Mr. Campbell of the arrival of fugitive slaves in Clinton using the Underground Railroad, on this date in 1859.

​​​​​​​And that's I﻿owa Almanac for May 6th...Listen to the extended audio version of today's story by clicking on the audio player above. ﻿

Iowa became a state in 1846, and every state needs a chief executive. So in October of that year, voters elected the new state's first governor.

The Democrats were represented on the ballot by Ansel Briggs, who won the nomination with 62 votes, nearly double the support his two opponents received combined. His opponent was not a Republican...that party had not yet been founded.  Thomas McKnight of the Whig party faced Briggs in the October general election.

During the campaign, Briggs had pledged that no outside businesses would hold any influence in his administration. True to his word, one writer noted his time in office was marked by an independence of principle, characteristic of his nature.

Prior to holding elective office, Ansel Briggs was a mail carrier and a stagecoach driver. He even served a term as Jackson County Sheriff, and in 1842, was elected to the Iowa Territorial House of Representatives.

During that first term in office, Governor Briggs oversaw the establishment of Iowa's system of government, its school system, and helped resolve Iowa's famous boundary dispute with Missouri.

After that single term, Briggs retired from public life and returned to private sector business, including activities in western Iowa. He died on May 5th, 1881, at the home of his son John in Omaha. He was originally buried there, but his body was later moved and reburied in his longtime Iowa hometown of Andrew.

The first professional baseball team in Keokuk opened play for the 1875 season on this date. They were called the Keokuk Westerns and they were part of the National Association of Professional Baseball Players. That league had been founded four years before as the first professional league in the United States.

The Westerns played in a field located beyond Rand Park, called Perry Park. The 11-player roster performed as many expansion teams do in professional leagues today, with a woeful 1 and 12 record. Things were so bad, the team actually dropped out of the league on June 16th, barely six weeks into the season. The player-manager was Joe Simmons, pictured above.

During that time, they faced one of the greatest pitchers of his day, Albert Goodwill Spalding. He won 207 games in the league, the most of any pitcher ever. After his playing days were over, Albert founded a sporting goods company and named it after himself--the Spalding Company.

Spalding played for the Boston team. Others in the league included teams from St. Louis, Chicago, New York, and Philadelphia. Those teams had been around for a while, and the following year, 1876, they left the National Association of Professional Baseball Players to form a new group, called the National League. They're still in business today,

And while there was organized baseball in Keokuk in various forms for nearly a hundred years after the Keokuk Westerns were founded, one has to wonder what might have been if the Westerns had made it through that first season and joined the teams we now call the Cubs, Braves, and others as members of the National League. That did not happen, but the first pitch for professional baseball in Keokuk was thrown on this date in 1875.
​
​​​​​​​And that's I﻿owa Almanac for May 4th...Listen to the extended audio version of today's story by clicking on the audio player above. ﻿

We know that the weather in Iowa can change rapidly. But rarely did it change as rapidly as it did in the days leading up to May 3rd of 2013.

The spring that year had been cold and damp. But on April 30th, the temperature reached 86 degrees in Des Moines. There were some thunderstorms as well, leading to hail damage in Cedar Falls and Waterloo, among other places.

By the time the storm ended on May 3rd, Osage had 13 inches of snow, the highest May storm total in Iowa history. Chariton had a foot of new white stuff...Lake Mills had more than 11 and a half inches, while Britt and Forest City each reported 11 inches.

Snow was continuously reported at the Des Moines International Airport from 6:34 a.m. on May 2nd, to 2:48 p.m. on May 3rd, an uninterrupted 31 hours and 14 minutes, leading to just under 7 inches of snow in less than a day and a half.

And just like that, it was over. The temperatures warmed back to seasonal norms, in the 60s...the snow melted...and a wild weather week was over. It started with temperatures in the 80s with thunderstorms and hail, and ended with a foot of snow common in many areas of the state, when the record May snowstorm ended on this date in 2013.
​
​​​​​​​And that's I﻿owa Almanac for May 3rd...Listen to the extended audio version of today's story by clicking on the audio player above. ﻿